THE TRUTH ABOUT THE SARAN-WRAPPED WIFE 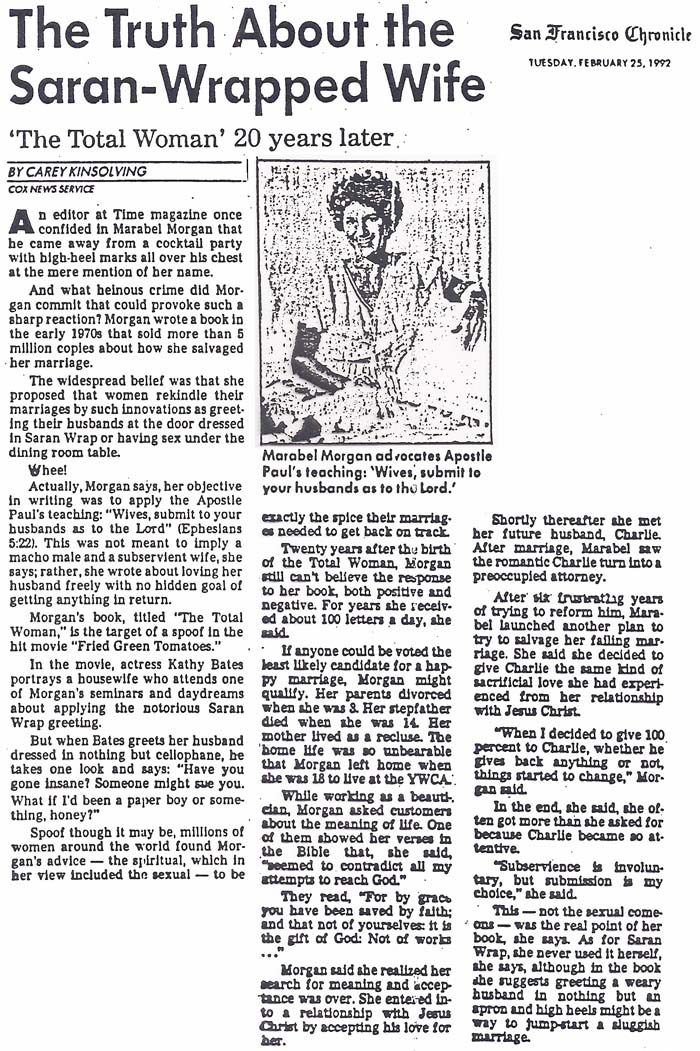 The Truth About the Saran-Wrapped Wife 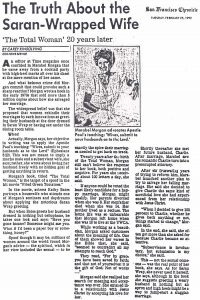 An editor at Time magazine once confided in Marabel Morgan that he came away from a cocktail party with high-heel marks all over his chest at the mere mention of her name.

And what heinous crime did Morgan commit that could provoke such a sharp reaction? Morgan wrote a book in the early 1970s that sold more than 5 million copies about how she salvaged her marriage.

The widespread belief was that she proposed that women rekindle their marriages by such innovations as greeting their husbands at the door dressed in Saran Wrap or having sex under the dining room table.

Actually, Morgan says, her objective in writing was to apply the Apostle Paul’s teaching: “Wives, submit to your husbands as to the Lord” (Ephesians 5:22). This was not meant to imply a macho male and a subservient wife, she says; rather, she wrote about loving her husband freely with no hidden goal of getting anything in return.

Morgan’s book, titled “The Total Woman,” is the target of a spoof in the hit movie “Fried Green Tomatoes.”

In the movie, actress Kathy Bates portrays a housewife who attends one of Morgan’s seminars and daydreams about applying the notorious Saran Wrap greeting.

But when Bates greets her husband dressed in nothing but cellophane, he takes one look and says: “Have you gone insane? Someone might see you. What if I’d been a; paper boy or something, honey?”

Spoof though it may be, millions of women around the world found Morgan’s advice – the spiritual, which in her view included the sexual – to be exactly the spice their marriages needed to get back on track.

Twenty years after the birth of the Total Woman, Morgan still can’t believe the response to her book, both positive and negative. For years she received about 100 letters a day, she said.

If anyone could be voted the least likely candidate for a happy marriage, Morgan might qualify. Her parents divorced when she was 3. Her stepfather died when she was 14. Her mother lived as a recluse. The home life was so unbearable that Morgan left home when she was 18 to live at the YWCA.

While working as a beautician, Morgan asked customers about the meaning of life. One of them showed her verses in the Bible that, she said, “seemed to contradict all my attempts to reach God.”

They read, “For by grace you have been saved by faith; and that not of yourselves; it is the gift of God; not of works . . .”

Morgan said she realized her search for meaning and acceptance was over. She entered into a relationship with Jesus Christ by accepting his love for her.

Shortly thereafter she met her future husband, Charlie. After marriage, Marabel saw the romantic Charlie turn into a preoccupied attorney.

After six frustrating years of trying to reform him, Marabel launched another plan to try to salvage her failing marriage. She said she decided to give Charlie the same kind of sacrificial love she had experienced from her relationship with Jesus Christ.

“When I decided to give 100 percent to Charlie, whether he gives back anything or not, things started to change,” Morgan said.

In the end, she said, she often got more than she asked for because Charlie became so attentive.

“Subservience is involuntary, but submission is my choice,” she said.

This – not the sexual come-ons – was the real point of her book, she says. As for Saran Wrap, she never used it herself, she says, although in the book she suggests greeting a weary husband in nothing but an apron and high heels might be a way to jump-start a sluggish marriage.