Why Did Jesus Turn Water Into Wine As His First Miracle? 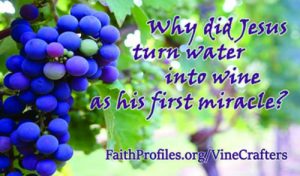 Before I tell you how you can RSVP or accept his wedding invitation, let’s look at Jesus as Lord of the wine.

When Jesus spoke of his “hour” at the Cana wedding feast, he spoke of his crucifixion. Immediately before eating the Passover Feast at the Last Supper with his disciples, Jesus said, “Now my soul is troubled, and what shall I say? ‘Father, save me from this hour’? But for this purpose I came to this hour. Father, glorify your name,” (John 12:27-28a).

Jesus is the ultimate lover. He’s the only lover who can fulfill your soul. Jesus gave his life so that you might live eternally and abundantly. The major picture we have of heaven is not people floating on clouds playing harps. Listen to Jesus’ own description of his kingdom, “I say to you that many will come from the east and the west, and will take their places at the feast with Abraham, Isaac and Jacob in the kingdom of heaven,” (Matthew 8:11).

Believe in Jesus today to secure your place at his wedding feast! Jesus drank the cup of suffering that you might drink the cup of his joy forevermore!

This article is sponsored by Leo and RoeAnn Estevez, owners of VineCrafters: fine, handcrafted wines, naturally made without added sulfites for superior taste. VineCrafters.com