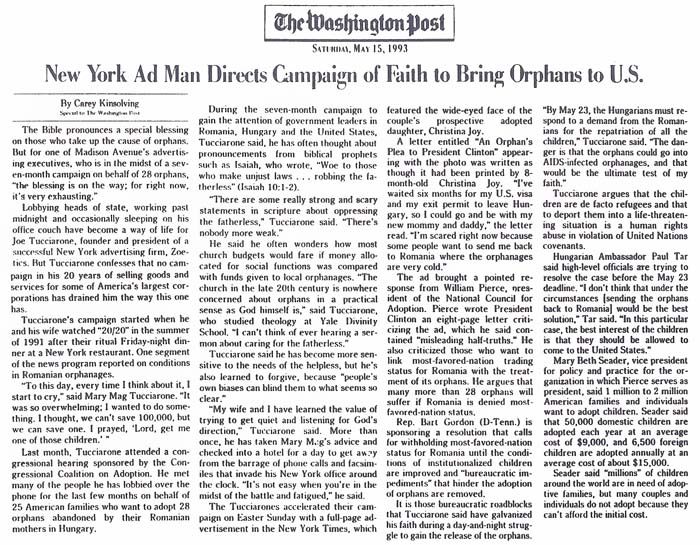 The Bible pronounces a special blessing on those who take up the cause of orphans. But for one of Madison Avenue’s advertising executives, who is in the midst of a seven-month campaign on behalf of 28 orphans, “the blessing is on the way; for right now, it’s very exhausting.”

Lobbying heads of state, working past midnight and occasionally sleeping on his office couch have become a way of life for Joel Tucciarone, founder and president of a successful New York advertising firm, Zoetics. But Tucciarone confesses that no campaign in his 20 years of selling goods and services for some of America’s largest corporations has drained him the way this one has.

Tucciarone’s campaign started when he and his wife watched “20/20” in the summer of 1991 after their ritual Friday-night dinner at a New York restaurant. One segment of the news program reported on conditions in Romanian orphanages.

“To this day, every time I think about it, I start to cry,” said Mary Mag Tucciarone. “It was so overwhelming; I wanted to do something. I thought, we can’t save 100,000, but we can save one. I prayed, ‘Lord, get me one of those children.’”

Last month, Tucciarone attended a congressional hearing sponsored by the Congressional Coalition on Adoption. He met many of the people he has lobbied over the phone for the last few months on behalf of 25 American families who want to adopt 28 orphans abandoned by their Romanian mothers in Hungary.

During the seven-month campaign to gain the attention of government leaders in Romania, Hungary and the United States, Tucciarone said, he has often thought about pronouncements from biblical prophets such as Isaiah, who wrote, “Woe to those who make unjust laws . . . robbing the fatherless” (Isaiah 10:1-2).

“There are some really strong and scary statements in scripture about oppressing the fatherless,” Tucciarone said. “There’s nobody more weak.”

He said he often wonders how most church budgets would fare if money allocated for social functions was compared with funds given to local orphanages. “The church in the late 20th century is nowhere concerned about orphans in a practical sense as God himself is,” said Tucciarone, who studied theology at Yale Divinity School. “I can’t think of ever hearing a sermon about caring for the fatherless.”

Tucciarone said he has become more sensitive to the needs of the helpless, but he’s also learned to forgive, because “people’s own biases can blind them to what seems so clear.”

“My wife and I have learned the value of trying to get quiet and listening for God’s direction,” Tucciarone said. More than once, he has taken Mary Mag’s advice and checked into a hotel for a day to get away from the barrage of phone calls and facsimiles that invade his New York office around the clock “It’s not easy when you’re in the midst of the battle and fatigued,” he said.

The Tucciarones accelerated their campaign on Easter Sunday with a full-page advertisement in the New York Times, which featured the wide-eyed face of the couple’s prospective adopted daughter, Christina Joy.

A letter entitled “An Orphan’s Plea to President Clinton” appearing with the photo was written as though it had been printed by 8-month-old Christina Joy. “I’ve waited six months for my U.S. visa and my exit permit to leave Hungary, so I could go and be with my new mommy and daddy,” the letter read. “I’m scared right now because some people want to send me back to Romania where the orphanages are very cold.”

The ad brought a pointed response from William Pierce, president of the National Council for Adoption. Pierce wrote President Clinton an eight-page letter criticizing the ad, which he said contained “misleading half-truths.” He also criticized those who want to link most-favored-nation trading status for Romania with the treatment of its orphans. He argues that many more than 28 orphans will suffer if Romania is denied most-favored-nation status.

Rep. Bart Gordon (D-Tenn.) is sponsoring a resolution that calls for withholding most-favored-nation status for Romania until the conditions of institutionalized children are improved and “bureaucratic impediments” that hinder the adoption of orphans are removed.

It is those bureaucratic roadblocks that Tucciarone said have galvanized his faith during a day-and-night struggle to gain the release of the orphans. “By May 23, the Hungarians must respond to a demand from the Romanians for the repatriation of all the children,” Tucciarone said. “The danger is that the orphans could go into AIDS-infected orphanages, and that would be the ultimate test of my faith.”

Tucciarone argues that the children are de facto refugees and that to deport them into a life-threatening situation is a human rights abuse in violation of United Nations covenants.

Hungarian Ambassador Paul Tar said high-level officials are trying to resolve the case before the May 23 deadline. “I don’t think that under the circumstances [sending the orphans back to Romania] would be the best solution,” Tar said. “In this particular case, the best interest of the children is that they should be allowed to come to the United States.”

Mary Beth Seader, vice president for policy and practice for the organization in which Pierce serves as president, said 1 million to 2 million American families and individuals want to adopt children. Seader said that 50,000 domestic children are adopted each year at an average cost of $9,000, and 6,500 foreign children are adopted annually at an average cost of about $15,000.

Seader said “millions” of children around the world are in need of adoptive families, but many couples and individuals do not adopt because they can’t afford the initial cost.