INTERNATIONAL CHURCH SEEKS TO TEACH GOSPEL TO THE NATIONS

International Church Seeks To Teach Gospel to the Nations 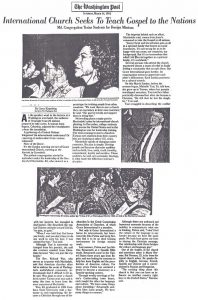 As the speaker went to the lectern at a Washington area hotel, the audience of 70 people from 25 nations prepared to take notes. A woman from Bogota, Colombia, adjusted her headphones to hear the translation.

A gathering of the United Nations delegation? An international conference? Or a meeting of ambassadors from various embassies?

None of the above.

It’s the Sunday morning service of Grace International Church, meeting at the Marriott in Greenbelt.

The potluck congregation started in September under the leadership of the Rev. Herschel Martindale, 63, who views it as a prototype for training people from other countries. “We want them to see a church they can reproduce in their own countries,” he said. “Our goal is to help and support them in doing that.”

Networking plays a major part in Martindale’s plan for international church planting. In December, college students from across the United States met in the Washington area for leadership training. The team training to start a church in Taiwan met students from their country who are studying in other U.S. cities.

Martindale speaks of changing entire countries. His plan is simple: Develop people and focus on character qualities such as faith, love, unity, truth, humility, commitment, loyalty and sacrifice. Those qualities, he said, not systematic theology, is what made the difference in Jesus’s disciples.

The impetus behind such an effort, Martindale said, comes from Jesus’s command to take the Gospel to all nations.

“Jesus Christ and his salvation puts us all in a spiritual family that knows no racial boundaries. It’s not wrong for us to be happy with our races, our countries, our background. But it’s so tremendous that when God puts us together in a spiritual family, it’s worldwide.’

Several persons who attend the church expressed almost a sense of relief at finally finding a community that accepts them. But Grace International goes further. Its congregation seems to appreciate each other’s differences. Each Sunday proves to be a cultural stretch.

On this March Sunday, before the sermon began, Michelle Tsai, 30, told how she grew up in Taiwan, where her parents worshipped ancestors. Tsai said her father practically disowned her after she became a Christian. “He felt that he lost his daughter,” Tsai said.

Tsai struggled in describing the conflict with her parents, but managed to find humor. She described the typical Chinese attitude toward God as, “no pain, no gain.”

“When I was told that God loves you freely, and you don’t have to do any work to earn his love, I was amazed by that,” Tsai said.

Although Tsai is somewhat estranged from her parents, she said she receives comfort from Christians because “they are just like my family.”

The Rev. Richard Woo, who serves as co-pastor with Martindale, said that American churches often fail to address the needs of Washington’s multicultural community. Internationals find it difficult to fit in, he said. Woo plans to start a church in his native Taiwan next year and is using this time to learn from the more experienced Martindale.

Woo, 40, graduated in 1984 from Iowa State University with a doctorate in civil engineering. He became a Christian through one of the churches in the Great Commission Association of Churches, of which Grace International is a member.

Not only is Grace International a haven for internationals, but Americans like Rita Patton and Greg Norman find it to be an ideal training environment for foreign mission work.

Last summer, Patton met Luz Marina Betancurth at a Spanish Bible study. Betancurth came to the United States three years ago from Bogota, and was looking for someone to help her learn English and the peculiarities of American culture. For many years Patton has nurtured a desire to become a missionary to a Spanish-speaking country.

Through weekly meetings at Patton’s Gaithersburg town house, each taught the other her language and culture. “We learn many things about friendship,” Betancurth said. “Rita likes Latin people. We have many things in common.”

Although there are awkward and humorous moments because of the inability to communicate what one is thinking, Patton said, “I don’t feel the culture or the language is any barrier because we have the same goals. We both have given our lives to sharing the Christian message. Our relationship with Christ bridges the culture and language gap.”

One of the leaders of the church and sometimes usher is Marty Norman. But Norman, 32, is far from the typical church usher. He speaks fluently in English, German, French, Spanish and Chinese and is conversational in Russian and Hungarian.

“The exciting thing about this church is that you can have an influence on another country right here in the United States,” Norman said.