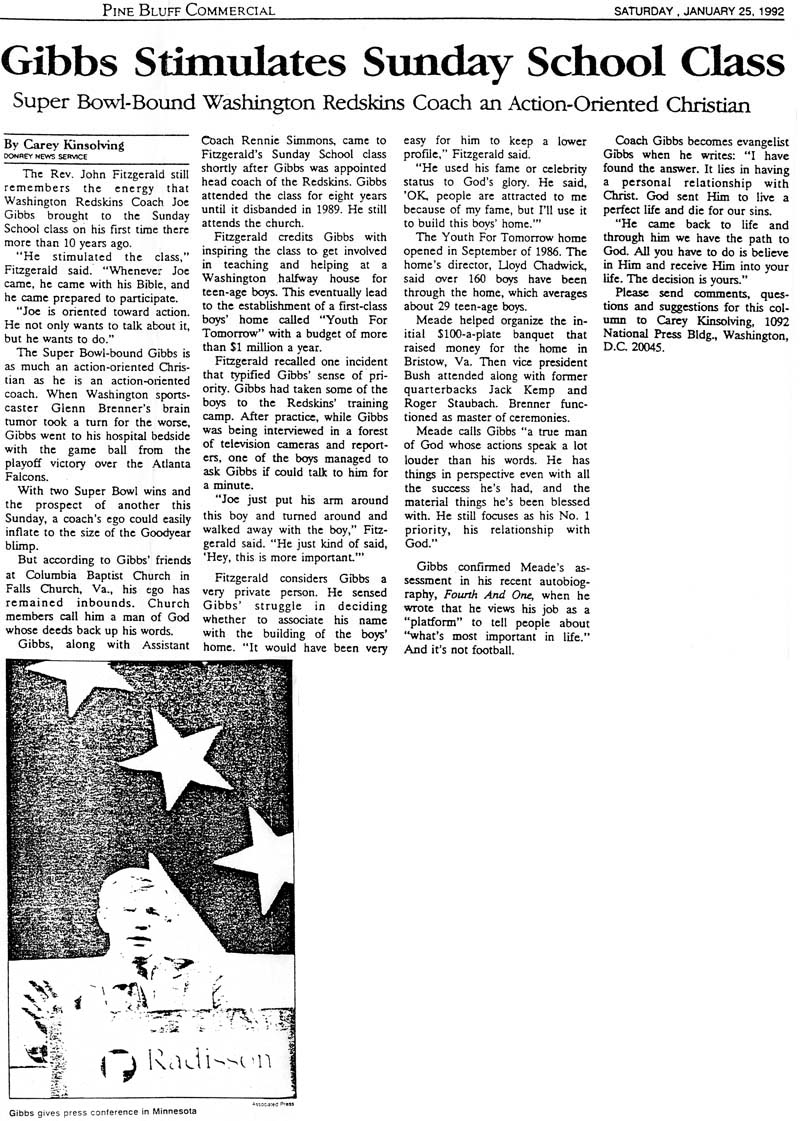 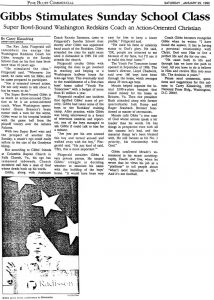 The Rev. John Fitzgerald still remembers the energy that Washington Redskins Coach Joe Gibbs brought to the Sunday School class on his first time there more than 10 years ago.

“He stimulated the class,” Fitzgerald said. “Whenever Joe came, he came with his Bible, and he came prepared to participate.

“Joe is oriented toward action. He not only wants to talk about it, but he wants to do.”

The Super Bowl-bound Gibbs is as much an action-oriented Christian as he is an action-oriented coach. When Washington sportscaster Glenn Brenner’s brain tumor took a turn for the worse, Gibbs went to his hospital bedside with the game ball from the playoff victory over the Atlanta Falcons.

With two Super Bowl wins and the prospect of another this Sunday, a coach’s ego could easily inflate to the size of the Goodyear blimp.

But according to Gibbs’ friends at Columbia Baptist Church in Falls Church, Va., his ego has remained inbounds. Church members call him a man of God whose deeds back up his words.

Gibbs, along with Assistant Coach Rennie Simmons, came to Fitzgerald’s Sunday School class shortly after Gibbs was appointed head coach of the Redskins. Gibbs attended the class for eight years until it disbanded in 1989. He still attends the church.

Fitzgerald credits Gibbs with inspiring the class to get involved in teaching and helping at a Washington halfway house for teenage boys. This eventually led to the establishment of a first-class boys’ home called “Youth For Tomorrow” with a budget of more than $1 million a year.

Fitzgerald recalled an incident that typified Gibbs’ sense of priority. Gibbs had taken some of the boys to the Redskins’ training camp. After practice, while Gibbs was being interviewed in a forest of television cameras and reporters, one of the boys managed to ask Gibbs if he could talk to him for a minute.

“Joe just put his arm around this boy and turned around and walked away with the boy,” Fitzgerald said. “He just kind of said, ‘Hey, this is more important.’”

Fitzgerald considers Gibbs a very private person. He sensed Gibbs’ struggle in deciding whether to associate his name with the building of the boys’ home. “It would have been very easy for him to keep a lower profile,” Fitzgerald said.

“He used his fame or celebrity status to God’s glory. He said, ‘OK, people are attracted to me because of my fame, but I’ll use it to build this boys’ home.’”

The Youth For Tomorrow home opened in September of 1986. The home’s director, Lloyd Chadwick, said over 160 boys have been through the home, which averages about 29 teenage boys.

Meade helped organize the initial $100-a-plate banquet that raised money for the home in Bristow, Va. Then vice president Bush attended along with former quarterbacks Jack Kemp and Roger Staubach. Brenner functioned as master of ceremonies.

Meade calls Gibbs “a true man of God whose actions speak a lot louder than his words. He has things in perspective even with all the success he’s had, and the material things he’s been blessed with. He still focuses as his No. 1 priority, his relationship with God.”

Gibbs confirmed Meade’s assessment in his recent autobiography, Fourth And One, when he wrote that he views his job as a “platform” to tell people about “what’s most important in life.” And it’s not football.

Coach Gibbs becomes evangelist Gibbs when he writes: “I have found the answer. It lies in having a personal relationship with Christ. God sent Him to live a perfect life and die for our sins.

“He came back to life and through him we have the path to God. All you have to do is believe in Him and receive Him into your life. The decision is yours.”