FILLING A VACUUM WITH NURTURING 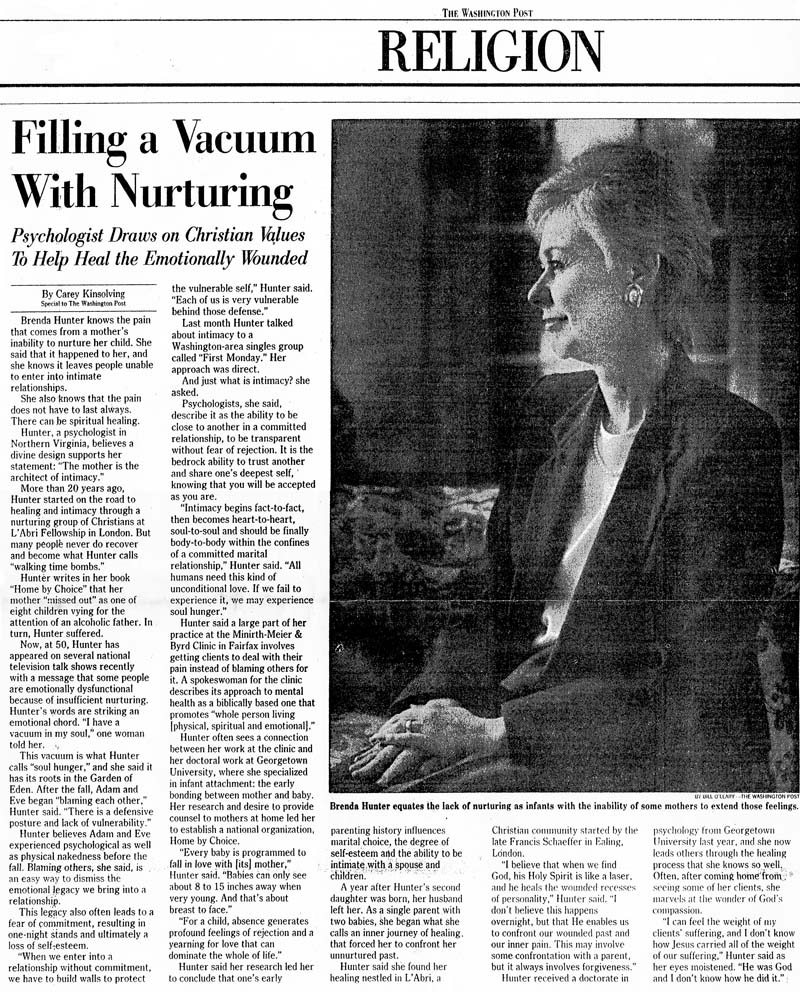 Filling a Vacuum With Nurturing

Brenda Hunter knows the pain that comes from a mother’s inability to nurture her child. She said that it happened to her, and she knows it leaves people unable to enter into intimate relationships.

She also knows that the pain does not have to last always. There can be spiritual healing.

Hunter, a psychologist in Northern Virginia, believes a divine design supports her statement: “The mother is the architect of intimacy.”

More than 20 years ago, Hunter started on the road to healing and intimacy through a nurturing group of Christians at L’Abri Fellowship in London. But many people never do recover and become what Hunter calls “walking time bombs.’

Hunter writes in her book “Home by Choice” that her mother “missed out” as one of eight children vying for the attention of her alcoholic father. In turn, Hunter suffered.

Now, at 50, Hunter has appeared on several national television talk shows recently with a message that some people are emotionally dysfunctional because of insufficient nurturing. Hunter’s words are striking an emotional chord. “I have a vacuum in my soul,” one woman told her.

This vacuum is what Hunter calls “soul hunger,” and she said it has its roots in the Garden of Eden. After the fall, Adam and Eve began “blaming each other,” Hunter said. “There is a defensive posture and lack of vulnerability.”

Hunter believes Adam and Eve experienced psychological as well as physical nakedness before the fall. Blaming others, she said, is an easy way to dismiss the emotional legacy we bring into a relationship.

This legacy also often leads to a fear of commitment, resulting in one-night stands and ultimately a loss of self-esteem.

“When we enter into a relationship without commitment, we have to build walls to protect the vulnerable self,” Hunter said. “Each of us is very vulnerable behind those defenses.”

And just what is intimacy? she asked.

Psychologists, she said, describe it as the ability to be close to another in a committed relationship, to be transparent without fear of rejection. It is the bedrock ability to trust another and share one’s deepest self, knowing that you will be accepted as you are.

“Intimacy begins face-to-face, then becomes heart-to-heart, soul-to-soul and should be finally body-to-body within the confines of a committed marital relationship,” Hunter said. “All humans need this kind of unconditional love. If we fail to experience it, we may experience soul hunger.”

Hunter said a large part of her practice at the Minirth-Meier & Byrd Clinic in Fairfax involves getting clients to deal with their pain instead of blaming others for it. A spokeswoman for the clinic describes its approach to mental health as a biblically based one that promotes “whole person living [physical, spiritual and emotional].”

Hunter often sees a connection between her work at the clinic and her doctoral work at Georgetown University, where she specialized in infant attachment: the early bonding between mother and baby. Her research and desire to provide counsel to mothers at home led her to establish a national organization, Home by Choice.

“Every baby is programmed to fall in love with [its] mother,” Hunter said. “Babies can only see about 8 to 15 inches away when very young. And that’s about breast to face.”

“For a child, absence generates profound feelings of rejection and a yearning for love that can dominate the whole of life.”

Hunter said her research led her to conclude that one’s early parenting history influences marital choice, the degree of self-esteem and the ability to be intimate with a spouse and children.

A year after Hunter’s second daughter was born, her husband left her. As a single parent with two babies, she began what she calls an inner journey of healing that forced her to confront her unnurtured past.

Hunter said she found her healing nestled in L’Abri, a Christian community started by the late Frances Schaeffer in Ealing, London.

“I believe that when we find God, his Holy Spirit is like a laser, and he heals the wounded recesses of personality,” Hunter said. “I don’t believe this happens overnight, but that He enables us to confront our wounded past and our inner pain. This may involve some confrontation with a parent, but it always involves forgiveness.”

Hunter received a doctorate in psychology from Georgetown University last year, and she now leads others through the healing process that she knows so well. Often, after coming home from seeing some of her clients, she marvels at the wonder of God’s compassion.