CHRISTMAS PARTY JUST A SMALL PART OF THEIR MINISTRY 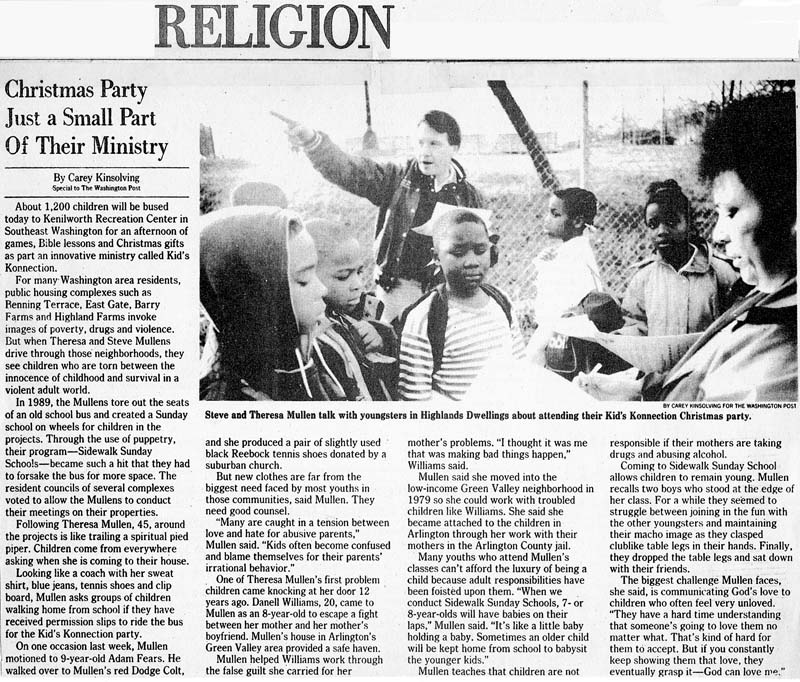 Christmas Party Just a Small Part Of Their Ministry

About 1,200 children will be bused today to Kenilworth Recreation Center in southeast Washington for an afternoon of games, Bible lessons and Christmas gifts as part of an innovative ministry called Kids’ Konnection.

For many Washington area residents, public housing complexes such as Benning Terrace, East Gate, Barry Farms and Highland Farms invoke images of poverty, drugs and violence. But when Theresa and Steve Mullen drive through those neighborhoods, they see children who are torn between the innocence of childhood and survival in a violent adult world.

In 1989, the Mullens tore out the seats of an old school bus and created a Sunday school on wheels for children in the projects. Through the use of puppetry, their program – Sidewalk Sunday Schools – became such a hit that they had to forsake the bus for more space. The resident councils of several complexes voted to allow the Mullens to conduct their meetings on their properties.

Following Theresa Mullen, 45, around the projects is like trailing a spiritual pied piper. Children come from everywhere asking when she is coming to their house.

Looking like a coach with her sweatshirt, blue jeans, tennis shoes and clipboard, Mullen asks groups of children walking home from school if they have received permission slips to ride the bus for the Kids’ Konnection party.

On one occasion last week, Mullen motioned to 9-year-old Adam Fears. He walked over to Mullen’s red Dodge Colt, and she produced a pair of slightly used black Reebok tennis shoes donated by a suburban church.

But new clothes are far from the biggest need faced by most youths in those communities, said Mullen. They need good counsel.

“Many are caught in a tension between love and hate for abusive parents,” Mullen said. “Kids often become confused and blame themselves for their parents’ irrational behavior.”

One of Theresa Mullen’s first problem children came knocking at her door 12 years ago. Danell Williams, 20, came to Mullen as an 8-year-old to escape a fight between her mother and her mother’s boyfriend. Mullen’s house in Arlington’s Green Valley area provided a safe haven.

Mullen helped Williams work through the false guilt she carried for her mother’s problems. “I thought it was me that was making bad things happen,” Williams said.

Mullen said she moved into the low-income Green Valley neighborhood in 1979 so she could work with troubled children like Williams. She said she became attached to the children in Arlington through her work with their mothers in the Arlington County jail.

Many youths who attend Mullen’s classes can’t afford the luxury of being a child because adult responsibilities have been foisted upon them. “When we conduct Sidewalk Sunday Schools, 7- or 8-year-olds will have babies on their laps,” Mullen said. “It’s like a little baby holding a baby. Sometimes an older child will be kept home from school to babysit the younger kids.”

Mullen teaches that children are not responsible if their mothers are taking drugs and abusing alcohol.

Coming to Sidewalk Sunday School allows children to remain young. Mullen recalls two boys who stood at the edge of her class. For awhile they seemed to struggle between joining in the fun with the other youngsters and maintaining their macho image as they clasped clublike table legs in their hands. Finally, they dropped the table legs and sat down with their friends.

The biggest challenge Mullen faces, she said, is communicating God’s love to children who often feel very unloved. “They have a hard time understanding that someone’s going to love them no matter what. That’s kind of hard for them to accept. But if you constantly keep showing them that love, they eventually grasp it – God can love me.”