A Fork In Road to Find Tomb 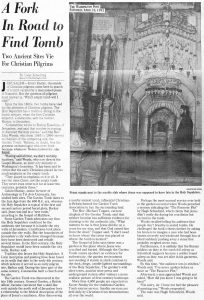 JERUSALEM – Every Easter, thousands of Christian pilgrims come here in search of a tomb vacated by a man named Jesus of Nazareth. But the question all pilgrims must answer is, “Which empty tomb will I visit?”

Since the late 1880s, two tombs have vied for the attention of Christian pilgrims. The Holy Sepulchre has a tradition dating to the fourth century, when the first Christian emperor, Constantine, sent his mother, Helena, to Jerusalem.

“Constantine wrote to Bishop Eusebius, of Jerusalem, and said that mother is coming to discover the holy places,” said the Rev. John Woods, who from 1985 to 1990 served as chaplain of the competing site, the Garden Tomb. “Helena, no doubt, was the greatest archaeologist who ever lived because whatever Helena looked for, she found.

“Having said all that, we don’t worship locations,” said Woods, who now directs the Gospel Mission, an inner-city ministry to Washington’s homeless. “It has been said by critics that the early Christians placed far too much emphasis on the empty tomb.

“They placed no emphasis on it at all. It was the risen Christ, not the empty tomb. They never even went to it for at least two centuries, probably three.”

Gabriel Barkay, senior lecturer of Archaeology at Tel Aviv University, has studied both sites. The Garden Tomb dates to the Iron Age from the 600 B.C. era, whereas the Holy Sepulchre is typical of the first and second century period burial plots, Barkay said. Jesus was laid in a “new tomb,” according to the Gospel of Matthew.

Tradition also favors the Holy Sepulchre. A Latin inscription and painting have been found on its walls that date to the early 4th century, which indicate it served as an early pilgrim site, Barkay said. During the later part of the same century, Constantine built a church over the site.

The Garden Tomb was discovered in the late 19th century. General Gordon, a British officer, became convinced that a skull-like rock outside the north wall of Jerusalem bore a relationship to the biblical description of the place of Jesus’s crucifixion. After discovering a nearby ancient tomb, influential Christians in Britain formed the Garden Tomb Association to buy the surrounding land.

The Rev. Michael Tupper, current chaplain of the Garden Tomb, said that neither location has sufficient evidence for claiming to be the authentic site. “What matters to me is that Jesus did die on a cross for my sins, and that God raised him from the dead,” Tupper said. “I don’t need to know where the cross was placed or where the tomb is located.”

The Gospel of John says there was a garden in the place where Jesus was crucified and buried. Although the Garden Tomb comes up short on evidence for authenticity, the garden environment surrounding it stands in stark contrast to the dark, dingy, candle-lighted surroundings of the Holy Sepulchre. The garden’s wild olive trees, ancient wine press and underground cistern offer visitors a more realistic picture of first-century landscape.

More than 4,000 people are expected on Easter Sunday for the traditional Garden Tomb sunrise service. Smaller services are held daily by Christians from denominations all over the world.

Perhaps the most unusual service ever held in the garden occurred when Woods preached a sermon ridiculing “The Passover Plot” by Hugh Schonfield, which claims that Jesus didn’t really die during his crucifixion but revived in the tomb.

Woods recalled telling his audience that people don’t breathe in sealed tombs. He challenged the book’s thesis further by asking his hearers to imagine a man who had been beaten severely and weakened through loss of blood suddenly pushing away a stone that probably weighed seven tons.

Furthermore, it is unlikely that the Roman soldiers on duty at the tomb fell asleep as Schonfield suggests because a soldier found asleep on duty was set afire in his garments, Woods said.

By this time, “the audience was in stitches,” Woods said. “I’ve never spoken before or since on ‘The Passover Plot.’”

Afterward, a man approached Woods and asked, “How did you know I was going to be here?”

“I’m sorry, sir. I have not had the pleasure of meeting you,” Woods responded.