Students to Join in Nationwide Prayer

An estimated 3 million will gather around flagpoles outside their schools on Sept. 16 in a show of faith 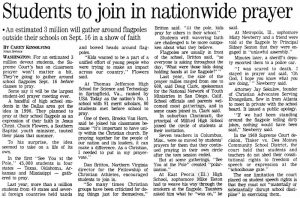 For an estimated 3 million devout students, the Supreme Court’s ban on classroom prayer won’t matter a bit. They’re going to gather around school flagpoles Sept. 16 before classes to pray.

Some say it will be the largest student-led prayer meeting ever.

A handful of high school students in the Dallas area got the idea in 1990. They planned to pray at their school flagpole as an expression of their faith in Jesus Christ. Chuck Flowers, a Southern Baptist youth minister, touted their plans that summer.

To his surprise, the idea seemed to take on a life of its own.

In the first “See You at the Pole,” 45,000 students in four states – Texas Oklahoma, Arkansas and Mississippi – gathered to pray.

Last year, more than a million students from 49 states and several foreign countries held hands and bowed heads around flagpoles.

“Kids wanted to be a part of a unified effort of young people who were trying to make an impact across our country,” Flowers said.

At Thomas Jefferson High School for Science and Technology in Springfield, Va., ranked by USA Today as the nation’s No. 1 school with 91 merit scholars, 80 students met before school to pray.

One of them, Brooks Van Horn, said he joined his classmates because “it’s important to have unity within the Christian church. By praying together for the people of our nation and its leaders, it can make a difference. As a Christian, I needed to put in my prayer-vote.”

Dan Britton, Northern Virginia director for the Fellowship of Christian Athletes, encouraged students to join in.

“So many times Christian groups have been criticized for doing things just for themselves,” Britton said. “At the pole, kids pray for others in their school.”

Students with wavering faith are challenged to be more outspoken about what they believe.

Flagpoles are usually in front of the school, Britton said, “so everyone is asking throughout the day, ‘What were those kids doing holding hands at the flagpole?’”

Last year, the size of the prayer rallies ranged from one to 600, said Doug Clark, spokesman for the National Network of Youth Ministries in San Diego, Calif. School officials and parents welcomed most gatherings, and in some cases joined in, Clark said.

In suburban Cincinnati, the principal of Milford High School joined the circle of students at their invitation.

Seven teachers in Columbus, Miss., were so moved by students’ prayers for them that they continued praying in their own circle after the teen session ended.

But at some gatherings, “See You at the Pole” created “polarization.”

At East Peoria (Ill.) High School, sophomore Mike Eeton had to weave his way through the smokers at the flagpole. Taunters asked him what he “was on,” he said.

At Metropolis, Ill., sophomore Misty Newberry and a friend were told at the flagpole by Principal Sidney Sexton that they were engaged in “unlawful assembly.”

Minutes later, a sheriff’s deputy escorted them to a police car.

“I was scared to death. I stayed in prayer and said, ‘Oh God, I hope you know what you are doing,’” Newberry said.

Attorney Jay Sekulow, founder of Christian Advocates Serving Evangelism, flew in from Atlanta to meet in private with the school board. It issued a public apology.

“If we had been standing around the flagpole telling dirty jokes, nothing would have been said,” Newberry said.

In the 1969 Supreme Court decision, Tinker vs. Des Moines community School District, the court held that students and teachers do not shed their constitutional rights to freedom of speech or expression at the “schoolhouse gate.”

The one limitation the court placed on student speech rights is that they must not “materially or substantially disrupt school discipline” in exercising them.