Susie rocked my world. She encapsulated everything I wanted. Smart, fun, deep, caring, with strawberry blonde hair trailing down her back. We met while in high school. One night she showed up while I was playing in our rock band. We talked a bit, but it wasn’t until she came by where I worked and invited me to a party that we got to know one another. After that, I was hooked.

Our relationship became exclusive. Over time we talked about the future, and how we wanted to get married. She wanted kids. How many? I grew up in a small family and said one or two. She wanted a whole football team!

We never did resolve that issue. Though we went to colleges close to one another, one weekend she came home. I had been sensing that something wasn’t right. That Friday night after the movie I told Susie I had something to say. I wanted to ask her to marry me. But she jumped in and said there was something she had to say first. She had met another guy. She wanted to break up with me.

She left early the next day to head back to college. I decided to pursue her, but her mind was set. Susie eventually married that guy. I felt like one of the walking wounded.

Six months later in the college café, I sat down with a couple of guys. Richard was fun, outgoing and carried a Bible. When I saw that, I had steered away from him. Now things in my life were in a different place. Perhaps he sensed I was more open.

Richard said to Art, “Do you think Mark knows?” My friend Art, the guitar player who preferred jam sessions and singing to attending class responded, “No, I don’t think so.”

Richard then said, “Do you think he would like to know?” Art said, “I don’t know, why don’t you ask him?”

So he did. Richard turned to me, and asked, “Would you like to know what we are talking about?” Since it was obvious I was being baited, I said “No.” Well, Richard told me anyway.

Richard shared that God loves us. And in his love for us, God sent his son Jesus. Jesus lived a righteous life, but was killed by religious leaders who were jealous of the following Jesus had.

Richard went on to explain that we all sin—we all do bad things. No argument from me there. I knew my history. He shared that though God loves us; our evil deeds separate us from him. God is just, righteous, and holy. He can’t just turn a blind eye to sin. He has to deal with it. A verse from a book in the bible called Romans puts it this way: “For the wages of sin is death, but the gift of God is eternal life in Christ Jesus our Lord” (Romans 6:23).

Richard also shared that though Jesus offered up his life as a ransom for us, redeeming us from death, he did not stay dead, but rose back to life three days later. God’s power had raised him to life and God was satisfied with Christ’s payment.

Richard came back to the verse that told about God’s love and shared how we could receive it. John 3:16 says, “For God so loved the world that he gave his one and only Son, that whoever believes in him shall not perish but have eternal life.” He explained that the one condition was that we received God’s Son by believing in him. He died for us. Would we believe in him?

I didn’t accept it. But Richard cared enough to drive an hour to pick me up and take me to a college Bible study. I felt so awkward! But they started the meeting with guitars and singing. That helped.

I don’t remember much of what was taught. But I remember the love they had for one another. At my college, the guys were only interested in a girl if she was pretty and dateable. But here at the Christian Ranch Youth meeting (“Ranch” for short), everyone seemed to care about others. You could see it in how they treated one another. For example, one girl tipped the scales at more than 300 pounds. In spite of her size, the guys treated her as well as they treated the beautiful blonde. I thought I knew what love was, but now I was seeing it.

After a month, I had asked questions about being saved. Did I have to be baptized to be saved? No, our works do not save us, only belief in Christ. Other questions followed, but still I had not trusted Christ. Then one day, alone, I knelt and prayed something like this: “God, I don’t understand a lot, but I believe you sent your Son Jesus to save us. I trust in him.”

What happened after that? No rockets went off, but I remember feeling peace and joy. I had been looking for love and got rejection. But now I experienced love from both God and fellow believers. As time passed, I wanted to serve God, not to get something, but to love him back for the grace he had given me.

How about you? Could this be your story too? It can be, if you will trust in Christ for forgiveness of sins.
— 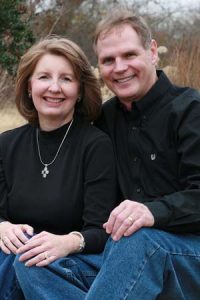 Some who have read my story have asked, “So, what happened? How did things turn out?”

I did find love, real love. After many years I met and married the one who is now the love of my life. Debbie and I have been married for more than 25 years and have two college-age sons. God filled the void I felt, and has blessed me more with a godly wife than I can tell. We minister together at Oak Hills Church in Argyle, Texas, where I serve as Senior Pastor. Having a life partner in Debbie has blessed the journey and God has brought us joy!