Power of prayer demonstrated in the desert 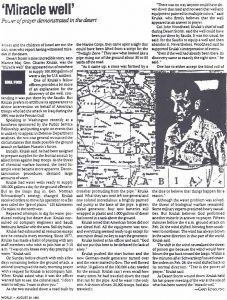 Moses and the children of Israel are not the only ones who report having witnessed miracles in the desert.

Desert Storm’s most incredible story, says Marine Maj. Gen. Charles Krulak, was the “miracle well” that appeared out of nowhere to supply 100,000 gallons of water a day for U.S. soldiers.

One of Krulak’s fellow officers provides a bit more of an explanation for the discovery of the well, contending it was put there by the Saudis. But Krulak prefers to attribute its appearance to divine intervention on behalf of American troops who led the attack on Iraq during the 1991 war in the Persian Gulf.

Speaking in Washington recently at a luncheon sponsored by the Public Service Fellowship, and putting a spin on events that is unlikely to appear in Defense Department analyses, the two-star general recounted the circumstances that made possible the ground assault on Saddam Hussein’s forces.

Initially, Krulak said, he had been assigned to prepare supplies for the frontal assault by allied forces against Iraqi troops. As the threat of chemical warfare loomed, the need for ample water became more apparent. Decontamination procedures demand large amounts of water.

Krulak had water wells ready to supply 100,000 gallons a day for the ground offensive. But as the Iraqis dug in, Gen. Norman Schwarzkopf’s strategy changed. Krulak received orders to move his operation to a flat area called the “gravel plains,” 120 kilometers (74 miles) to the northwest.

Krulak had exhausted all resources except one he consults every morning. Since 1977, Krulak has made a habit of praying with any staff members who wish to join him at 7:15 a.m. “I was on my knees every day praying for water,” Krulak said.

On Sunday before church with only a few days remaining before the ground attack, a colonel interrupted the early morning prayer with a request for Krulak to accompany him. When Krulak asked what it was the officer wanted him to see, the colonel said, “I don’t want to tell you, I want to show you.”

As the two traveled down a road built by the Marine Corps, they came upon a sight that could have been lifted from a script for the “Twilight Zone.” They saw what looked like a pipe rising out of the ground about 30 to 50 yards off the road.

“As it came up, a cross was formed by a crossbar protruding from the pipe,” Krulak said. What they saw next left one general and one colonel incredulous: a brightly painted red pump at the base of the pipe, a green diesel generator, four new batteries still wrapped in plastic and 1,000 gallons of diesel fuel stored in a tank above the ground.

Krulak noted that American forces did not use diesel fuel. All the equipment was new, and everything seemed ready to go except for one minor detail: no key to start the generator.

Krulak looked at his officer and said, “God did not put this here to be defeated for lack of a key.”

Krulak pushed the start button and the new German-made generator turned over and the water started to flow. The well flowed within 10 gallons of the 100,000 a day needed for the assault. Krulak can’t even recall how many times he had traveled down the road that ran by the pipe. And he wasn’t the only one. A division of men, 20,000 troops, had also traveled it.

There was no way anyone could have driven down that road and not seen that well and equipment painted in multiple colors,” said Krulak, who firmly believes that the well appeared as an answer to prayer.

Col. John Woodhead, Krulak’s chief of staff during Desert Storm, said the well could have been put there by Saudis. It was not usual, he said, for the Saudis to equip a well and then abandon it. Nevertheless, Woodhead said he supported Krulak’s interpretation of events.

“Even if the well had already been there, its discovery came at exactly the right time,” he said.

One has to either accept the blind roll of the dice or believe that things happen for a reason.”

Although the water problem was solved, the threat of biological warfare remained. Some military experts predicted heavy casualties. But Krulak believes God performed another miracle in answer to prayer. Fifteen minutes before the 4 a.m. ground attack on Feb. 24, the wind shifted, blowing from southwest to northeast. The wind has always blown in the same direction in that part of the world, Krulak said.

The shift in the wind neutralized the threat of poison gas because the wind would have blown the gas back toward the Iraqis. Within a few minutes after Schwarzkopf issued ceasefire orders on Feb. 28, the wind shifted back to its normal direction. “That is the power of prayer,” Krulak said.

As Desert Storm wound down, Krulak held his last prayer meeting of the war at the site of what has been named the “miracle well.”