Couple Are Missionaries In the Comfort of Home 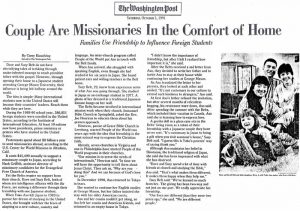 Dave and Suzy Belt do not have electrifying tales of trekking through snake-infested swamps to reach primitive tribes with the gospel. However, through opening their home to a Japanese student attending George Mason University, their influence is being felt halfway around the world.

The idea is simple: Many international students now in the United States will become their countries’ leaders. Reach them while they are here.

Protestants spend about $8 billion a year to send missionaries abroad, according to the U.S. Center for World Missions in Altadena, Calif.

It costs $45,490 annually to support a missionary couple to Japan, according to Hank Griffith, assistant director of missionary candidates for the Evangelical Free Church of America.

Yet the Belts require no support from their church. Dave and Suzy Belt, both of whom are intelligence officers with the Air Force, are making a difference through their friendship with one Japanese student.

When Yuko Aso left Japan in 1989 to pursue her dream of studying in the United States, she brought with her the fears of adapting to a new culture, country and language. An inter-church program called People of the World put Aso in touch with the Belt family.

When Aso arrived, she struggled with speaking English, even though she had studied it for six years in Japan. She found patient ears and willing teachers in the Belt home.

Suzy Belt, 29, knew from experience some of what Aso was going through. She studied in Japan as an exchange student in 1977. A photo of her dressed in a traditional Japanese kimono hangs on her wall.

The Belts became involved in international mission work when their church, Immanuel Bible Church in Springfield, asked the Rev. Joe Henricas to educate them about his proven approach.

Henricas, pastor of Grace Bible Church in Leesburg, started People of the World two years ago with the idea that friendship is the most natural way to express the Christian faith.

Already, seven churches in Virginia and one in Philadelphia have started People of the World programs in their churches.

“Our mission is to serve the needs of internationals,” Henricas said. “In time we will have the opportunity to tell them about Jesus Christ. They ask us, “Why are you doing this? And we say because of God’s love for you.”

In December 1990, Aso returned to Tokyo in tears.

She wanted to continue her English studies at George Mason, but her father insisted she stay with her older American cousin.

Aso and her cousin couldn’t get along, so Aso left her cousin and American friends, and returned to an empty house in Tokyo.

“I didn’t know the importance of friendship, but after I left I realized how important it is,” she said.

After the Belts received a sad letter from Aso, they decided to write her father and to invite Aso to stay at their house while continuing her studies at George Mason.

As Aso translated the letter to her parents, they looked at each other and smiled. “It’s not customary in our culture to extend such kindness to strangers,” Aso said.

At first Aso’s father refused the invitation, but after several months of relentless begging, his resistance wore down, Aso said. After spending the summer with the Belts, which included their vacation in Canada, Aso said she is learning how to express love.

A geisha doll in a glass case sits in the Belts’ living room as a token of their friendship with a Japanese couple they have never met. “It’s customary in Japan to bring a gift when you visit someone’s house,” Suzy Belt said. “I guess this is Yuko’s parents’ way of saying thank you.”

Although Aso maintains her belief in Shintoism, the traditional religion of Japan, she said she has been impressed with what she has observed.

“Dave and Suzy spend a lot of time with friends at church and studying the Bible,” Aso said. “That’s what makes them different. It makes them happy when they help me.”

Suzy Belt said: “We’ve learned so much from her. The giving has been two-way and not just on our part. We really appreciate her friendship.