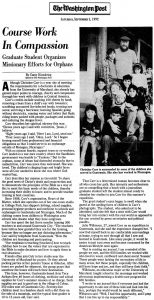 A Close-Up Critique on Homelessness

Two years ago, Marvin Olasky, a University of Texas journalism professor, went undercover to experience the services available to the homeless and the attitudes that characterize Washington’s social workers.

Although all his physical needs were met, including swimming privileges at a downtown pool, his spiritual needs were ignored. Olasky calls such treatment inhumane and lacking in compassion.

“A lot of the war on poverty has failed because it’s really been a war against God,” Olasky said. “Anti-poverty programs have left out the spiritual and have often discriminated against groups that want to have a spiritual emphasis.”

While eating a free lunch in a downtown church, Olasky asked one of the workers for a Bible. “A bagel?” she asked. After he repeated the request, the worker informed him that she did not have any Bibles.

In recent weeks, Olasky, 42, has appeared on numerous talk shows explaining how private Christian organizations of the 19th century waged a more effective war on poverty with fewer material resources. The current welfare system, he says, is driven by a false form of compassion that often does more harm than good. It’s an impersonal kind of compassion that fails to distinguish between the deserving and the undeserving poor.

“There’s nothing shameful about being poor,” Olasky said in a Washington interview. Things can go wrong: People lose their jobs, get sick and often are innocent victims; for example, children of alcoholics and drug addicts. They are certainly deserving, he said.

But the undeserving poor need a kick in the pants rather than a pat on the back, Olasky said. The 19th-century Christian social worker assumed that any able-bodied person “with good values could get out of poverty,” he said.

The findings of Olasky’s research are contained in his new book, “The Tragedy of American Compassion.”

The book has sparked debate among some authorities on the modern welfare system. Robert Bothwell, executive director of the National Committee for Responsible Philanthropy, said Olasky’s view of the 19th century is “romantic.” In a recent panel discussion of Olasky’s book at the Heritage Foundation, Bothwell said a return to the 19th-century idea of charity is impossible because of the sociological and economic changes that characterize modern society.

Bothwell said that families are smaller today; that people are more transient, resulting in a narrower sense of community in neighborhoods; and that technology has changed the way people communicate. “Life is far more complex now,” Bothwell said.

Olasky concedes that society has changed but maintains that the nature of people remains the same. Hence, the problem of the modern welfare state is a theological one, not a sociological one, he said.

Christian social workers of a century ago practiced tough love because they held a biblical view of people: sinful, created in the image of God, but not beyond God’s redeeming grace, Olasky said. That view contrasts with “the social universalist idea that all you do is give people material things, and they will be wonderful.”

Olasky warns of a “compassion backlash” rooted in frustrated taxpayers who sense that tax dollars are being wasted on paupers who choose not to work. That backlash often results in another anti-biblical approach to dealing with the poor, he said, “the social Darwinist idea of getting rid of the undesirables.”

One of the keys that made Christian programs of a century ago so effective was “affiliation,” or helping the destitute to restore family and community bonds that, for whatever reason, had been snapped.

He said the welfare system begun in the 1930s maintained some earlier Christian values by promoting the idea that it was much better to have any kind of a job than to be on the dole.

But in the 1960s, attitudes change. “There was a real push for anyone who was eligible to get onto a program,” he said, and it became shameful to take an entry-level job.

Olasky cited Washington’s Gospel Mission as an example of an organization that exercises true compassion because it addresses spiritual as well as physical needs.

“We believe anyone can put a new suit on a man, but only the grace of God can put a new man in the suit,” said the Rev. John Woods, executive director for the mission.

When the homeless come to the 150-bed mission, Woods, 64, frequently asks a question he has borrowed from Jesus: “Do you want to be made whole?” Woods said he often receives cool responses from talk show hosts when he says 50 percent of homelessness is a moral problem.

Accountability is often the key to getting people back on the right track, Woods said. The mission requires those who stay to attend three meetings a week and to submit to random drug tests. The mission staff tries to find jobs for its occupants. The unemployed work two to three hours a day at the mission.

“A gospel mission is the only place a guy can come in blind drunk and retire 25 years later as its executive director,” Woods said. The Gospel Mission is part of the 450-member International Union of Gospel Missions. Many of its member directors initially came to a mission seeking help.

Lack of self-esteem is a major problem with the homeless, Woods said. Through Bible studies, he teaches them: “In Christ, we’re somebody. There’s no need to be trapped by the past. We can move forward to become all that God destined us to be.”