A Washington-based group of Christian artists is responding to an official plea from St. Petersburg, Russia – the intellectual center of the 1917 Bolshevik revolution – to help care for its orphans.

And so, for the first time in this century, a major cultural city will formally be host of a Christian art festival, according to Jerry Eisley, director of the Washington Arts Group and owner of a Washington art gallery.

The art group and the Academy of Christian Art in Canada are sponsoring the First International Christian Arts Festival in St. Petersburg from Dec. 31 to Jan. 7. St. Petersburg’s city council has designated funds raised through the festival to aid its orphans.

“The festival title, ‘Sacred Fire,’ is a call to God’s people to establish and affirm a growing movement of artists around the world who lift up their art and beauty and holiness to God,” Eisley said.

“The lie in the art world as well as in politics was that God had died and we must therefore resort to our own spiritual resources,” he said.

St. Petersburg, which has reclaimed its old name after being known during communist rule as Leningrad, is home of the world’s largest repository of art. The Hermitage has more than 5 million works of art. The Russian czars built the collection over many decades.

On a recent visit, Eisley said, his senses were overwhelmed after spending an hour in a room of Rembrandts.

Eisley and other artists traveling to St. Petersburg also want to pay tribute to the courage of artists in the Soviet Union. Many of them continued to paint while suffering communist persecution.

“I want to learn from them,” said Bruce Herman, an art professor at Gordon College in Wenham, Mass. “Honestly, I feel I’m going over there as a student,” Herman is one of the artists who will exhibit works in St. Petersburg.

Living under repression has given Russian artists a sense of community and meaning, he said. Conversely, American artists suffer from the gradual erosion of meaning.

“The art world has largely run out of gas,” Herman said. “It’s pretty clear even to the art historians and critics that artists have largely lost their nerve. The simple message of the pursuit of truth has been lost, and that’s what the Soviet artists have regained.”

Herman views the biblical tradition as a treasury waiting to be unpacked.

“We don’t have to be scraping the pavements for meaning,” but he quickly acknowledged, “I’m not going to bully someone into what I believe. I just want to have a chance to put my case forward.”

Herman sees himself engaging in the great conversation of the ages, which involves ideas about culture, meaning and purpose. But to participate in a dialogue, he said, he must stand in a tradition.

About 60 people listened intently at a gathering sponsored by the Washington Arts Group as Herman lamented the plight of educated people who try to understand modern art.

He said many artists are like people of ancient Babylon who tried to make a name for themselves when they built the tower of Babel. He carried the analogy even further by saying that many artists are speaking a private language that cuts off any possibility of communication, similar to the confusion of languages at Babel.

“A lot of people are suspicious of artists because they feel like it’s an ‘in’ crowd gathering that they are not invited to,” Herman said.

Instead of painting to please the critics, Herman said, his paintings are offerings to Jesus Christ.

“Our whole activity as artists is predicated on the idea that if Christ can say ‘well done,’ if he’s pleased with what we are doing, then we’re succeeding.” 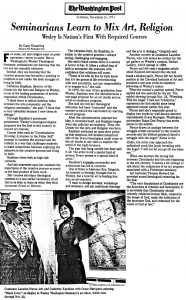